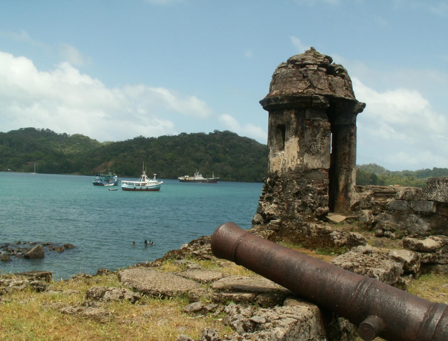 Portobelo is one of the places with the longest history in Panama and also one of the most abandoned. It was the land of pirates and conquerors and has been forgotten for years, although the announcement of a millionaire restoration plan has restored its neighbors’ hope.

“They have always turned their backs on us and the saddest thing of all is that Portobelo is a gold mine, but we have to exploit it touristically,” said Rafael González, a young man who manages a small and improvised parking lot at the entrance of the town and that in his spare time he also works as a boatman.

Nestled on the shores of the Caribbean Sea in a homonymous bay and guarded by three forts, Portobelo was one of the most important American ports during the colonial era, through which most of the riches that Spain embarked towards Europe from the conquest of America passed.

“In this bay the first battle between the English and Spanish troops (1739) won by the famous officer (Edward) Vernon took place. Portobelo Road, London street, is named for this contest,” said Lourdes Gutiérrez, coordinator of a foundation that seeks to make visible the cultural richness of the town.

“The rest of the pirate (Francis) Drake also rests in these waters and the English come every so often to try to recover them. There are sunken galleons and the crabs keep taking coins,” she added.

That splendid and effervescent past contrasts with the current desolation. The stray dogs loiter in the square, the children play among the mountains of garbage and the pipes empty their black waters in the streets, while abandoned sailboats sink in the bay and the lush jungle eats the forts.

In fact, colonial fortifications were included in 2012 on the List of World Heritage in Danger of the United Nations Organization for Education, Science and Culture (Unesco).

“I have almost no grandchildren left, everyone has gone to the city; there is very little to do and living is not comfortable, we do not have any drinking water, but well, let’s see how that plan works,” said Elsa Molinar, a 70-year old native of this town located 100 kilometers north of the capital.

The architect of the National Institute of Culture (INAC) Javier Edwards told Acan-Efe that the current state of the town is a consequence of the scarce budget that governments have historically allocated to culture and the “deficient actions” of local authorities.

Gutiérrez, of the Bahía Portobelo Foundation, said, however, that neglect essentially responds to the prevailing racism of the Panamanian ruling classes: “Panama is a very racist society and has never wanted the development of the Caribbean, where the majority of the Afro-descendant population is located”.

The plan that has made the residents of Portobelo begin to see some light at the end of the tunnel is a $107-million loan approved by the Inter-American Development Bank (IDB) for the preservation of Panama’s cultural and natural heritage.

The architect of the INAC explained that part of these funds will be used mainly to restore the forts and the building where formerly was the Customs Office, which will “boost” domestic and foreign tourism and attract investment.

Portobelo is also the epicenter of a unique culture in the world developed by African slaves to make fun of the conquerors in the colonial era and is called “Congo”.

The rhythms, dances and crafts of the Congo are so rich and unique that Unesco will evaluate next December if it declares them intangible cultural heritage of humanity.

announced, I would have told you a lot about our abandonment, but right now we are excited and hopeful,” the coordinator of the foundation said.